How do I set up an enterprise account for myself or my company so we can start creating and launching our own sessions?

We have a step by step guide for you on this page.

How do I track my group’s activity and participation?

There are a few things you can track during a session by perusing the participation table.  To view it, go into your session page and click on “view activity.”

Track email delivery:  minapsys sends out a notification email at the beginning of the three stages.  If you see a red dot next to a group member’s email address, that means the email ‘bounced’ (did not reach the intended recipient due to an incorrect email address or heightened security firewalls).  If the email is incorrect, you still have time to update the email address as long as the response stage isn't over yet.  If the email did not go through due to a security firewall, you can reach out to the member and ask them to consult with their IT department to whitelist the minapsys emails.  For more support in this matter, feel free to contact us at support@minapsys.com.

Track email opens: The orange dot next to a member’s email address means they have not yet opened the minapsys email notifying them of the session. 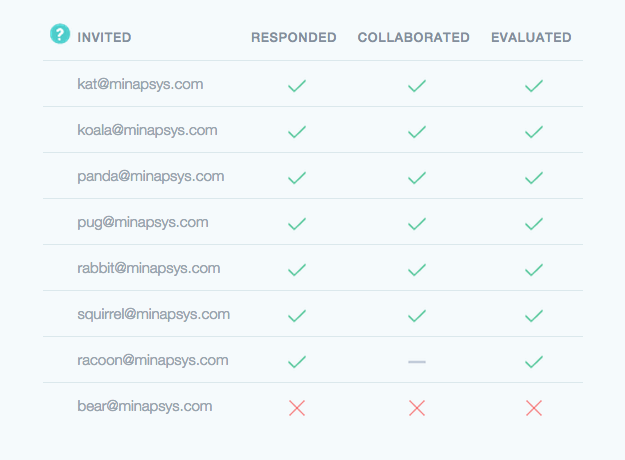 Can I delete or remove a participant’s response in my session?

Minapsys is all about open, unbiased communication.  As minapsys is similar in functionality to email, where a “reply” is sent to others to read, we do not have any built-in features that allow hosts to delete responses.  If you would like a participant to re-think their response, we think that talking to them in person and asking them to re-write and re-submit is a good way to handle the situation.

Although it is rare to encounter such an issue, we have seen that malicious responses are always rated very lowly by the group during the Evaluation stage.

However, there is one thing you can do, as long as it is still during the response stage: you can remove that user from the group.  Go into your session page, and click on “edit participants” below the subject line.  Follow the steps to remove the participant from the group.  Once they have been removed, their response will be removed as well.  Adding, removing and editing participants is only a function that can be done during the response stage.

How do I upload my own profile photo?

It’s very important for the host to have a custom profile photo.  This image will be included in the session pages and  the notification emails.  When participants recognize you, participation rates go up.  Some hosts choose to use a company logo as their profile image.
To upload your own photo:  log into your minapsys account, go to “settings” on the left tab and click on “edit” under the profile photo and follow the instructions!

How do I check the schedule of the session?

There’s three stages in each minapsys session, meaning there’s 3 different sets deadlines, too.  Click on the calendar icon on the top right hand area of the session’s page.

Do participants need an account to participate in my session?

No, participants are not required to create an account with minapsys.  They can participate in sessions by clicking on the buttons in the notification emails that are sent to them when a session or stage begins.

How do I change the email address for my account?

Due to security reasons, we do not allow users to change their registered email for their accounts at this time.  If there is an urgent situation, please contact us directly at: support@minapsys.com

How do I create a session?

If you are an enterprise customer, you will be able to have access to the create page.  Click on “create” in the left side menu bar.  If you need further instructions, check out our tutorial here.

When I go to the create page, I am asked to fill out a enterprise request form.  How do I create a session?

The create page is exclusively for our enterprise customers.  If you know that your company already has an enterprise account with minapsys, reach out to your company’s manager who is in charge of minapsys.  They will then coordinate with us in activating your create page.

If you or your company does not have an enterprise account with us, you can contact us for a quote at support@minapsys.com, or by filling out the form in the create page.

What is the response stage?

It’s the first stage when a session starts.  In this stage, a participant will be asked to respond to the host’s question.  There is a time limit and a maximum character limit for submitting responses, which you’ll see when you access the session in your web browser.

When the session starts, the first stage is the Response stage.  Group members receive an email notifying them that the stage has started.  In this email, there will be a button to click that will take them to the session in their web browser.  They can enter and submit their response from this page.  To learn more about participants, check out the FAQ for Participants here or see our visual guide on “what participants experience” in our getting started guide.

What happens if a participant doesn’t submit a response before the deadline?

Anyone who does not submit a response before the deadline is treated as a someone who opted out of the session.  These users will not be able to participate in the session anymore.  They will not receive any more emails regarding that session, including the notification email for the results.  However, non-participants can still view the results when they become available by clicking on the button in the original email when the session ends and view the results.

What is the collaboration stage?

The collaboration stage is the second stage and starts once the Response stage has finished. It’s the “brainstorming” part of the session, where participants can get inspired by fellow group members and rework and resubmit their final response.
In this stage, participants will be given about 5 responses from their group to review and consider.  They can then re-write, add to, or edit their original response and submit their final answer.  The maximum character limit for the response will be doubled in this stage.

For an overview of the minapsys process, watch the video in the  “what is  minapsys” question in this section.

What happens if a participant forgets to participate in the collaboration stage?

Can a participant change their final response even though it’s already been submitted?

As long as there is still time in the collaboration stage, anyone may change and re-submit their final answer as many times as they’d like, as long as they don’t forget to click “submit”!
As the host, you will be able to view the participants’ responses as they are coming in (if not, try refreshing).

What is the evaluation stage?

The evaluation stage is the 3rd and final stage of the minapsys session.  It comes after the collaboration stage is finished.
In this stage, participants are asked to rate 5 of the group’s final answers using a start system (0.5 stars to 5 stars).
Minapsys will calculate the average score from these ratings to rank the responses in the results.

For an overview of the minapsys process, watch the video in the  “what is  minapsys” question in this section.

What happens if a participant forgets to participate in the Evaluation stage?

Can a participant change the ratings even though they've been submitted?

As long as there is still time left in this stage, participants can go back and change the ratings by just re-clicking the stars.  They won’t need to click any “submit” button as the ratings are automatically saved.

Results of a Minapsys Session

Who gets to see the results, and when?

Everyone who was included in the session has access to the results.  However, only those who have submitted a response are considered ‘participants’ and these users will be the only ones who will receive an email notification when the results are ready.

The results are immediately made available to the group when the last stage (Evaluation stage) is finished.

Are the results anonymous?

Yes.  Results are anonymous to group members.  The only person who can see the names of the participants is the host.

If somes doesn’t participate in the session, will they still be able to access the results?

While they will not receive any email notification, they may still access the results by clicking on the button in the first email (the subject line will begin with “Please respond”).

How are the scores calculated?

Minapsys will take an average of the ratings given by the group members.  In some cases, if many members did not participate in the Evaluation stage, there will be no score for certain responses because they did not get rated by anybody.

back to support center
FAQ for Participants
Tutorials and Guide videos